MINI Superleggera Vision Concept: What Dream are Made of 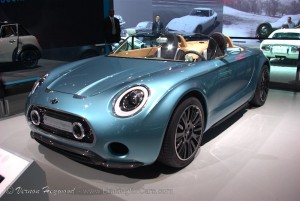 The MINI Superleggera Vision Concept is the stuff dreams are made of. When I was a kid, we’d go camping and I’d leave the Hot Wheels at home and bring a bucket of those cheap metal cars instead. You know the ones, stamped in zinc, hollow underneath, the whole thing sprayed in one color—interior and all. They had those crappy metal wheels that never rolled too well. My cousins and I would always fight over the two Jaguar D-Type cars in the set, one green and one purple, with that way cool racing fin running down the deck lid. Two cars, three boys, it was never pretty. That desire to own the coolest car in the bucket, the one with the cool fin running down the deck lid, is exactly why I love the MINI Superleggera Vision Concept. It rekindles my boy racer dreams of old. 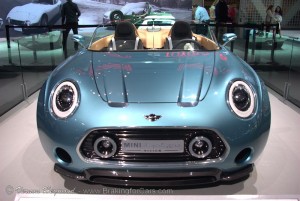 Open top vehicles have been a part of motoring since Nicolas-Joseph Cugnot decided to do away with the horses pulling his wagon, but it was the British who really made two-seater roadsters
what they are today. Aston Martin, MG, Triumph, and Jaguar to name a few became the epitome of what gentlemanly motoring was meant to be. MINI and Touring Superleggera returned to the roots of that British motoring heritage and just as they did with those fabulous marques of old, hand shaped the stunning body of the Superleggera Vision. Expansive sheets of aluminum, lovingly hand formed into shapes that convey speed and elegance, that make one lust for sweeping curves on the open road in the same way photographers lovingly retouch and airbrush photos to make us lust after the curves of super models. The difference is, super models are digitally hammered into unreal misperceptions of beauty, the Superleggera is very real, has been hammered into motoring perfection, and is waiting for you at the 2014 Los Angeles Auto Show. And consider this while you are waiting for your significant other to get ready to head to the show: The Superleggera was already beautiful as you rolled out of bed this morning. Without make up, without doing its hair, and without a designer wardrobe the Superleggera is beauty in motion, even before you had your coffee. 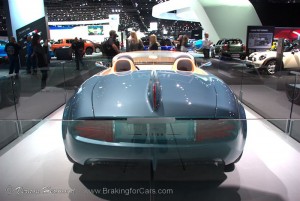 Styling cues to British motoring heritage can be found throughout the car. The taillights are reminiscent of the Union Jack, each light representing one half, creating the full effect when viewed together. The inside door handles also vaguely mimic the flag of the UK. Just as in the motoring days of yore, the dashboard is minimalist in design, focusing only on the essentials leaving the driver to enjoy the car, and the road, without distraction. Brushed aluminum spans the dash and encompasses the gauges, as sumptuous leather awaits to embrace you as slide behind the wheel. The Como Blue paint accentuates the lines so well, you’d swear the car was hand shaped in blue metal rather than being painted that color. This is in large part due to the large sheets of aluminum used to minimize the number of seams giving the Superleggera a more fluid look, and much more precise seams that early British cars could only dream of.

The MINI Superleggera Vision is About Design 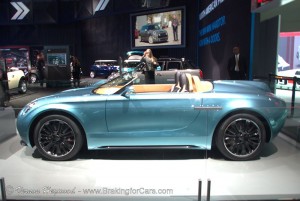 As you admire the rest of the exterior, notice there are no open slats in the hexagonal grille. That’s because the MINI Superleggera Vision is powered by an electric motor. And that’s all you get to know about what’s under the hood. MINI has not disclosed any further information thus far, so that says to us the most important aspect of the Superleggera is the design. These could very well be styling cues coming to the MINI line of cars in the near future. Looking toward the future while maintaining its past heritage is something MINI has done very well since BMW AG relaunched the brand in 2001. The Superleggera continues this tradition of guarding MINI’s heritage while embracing its possible future just as well, if not better, than the MINI vehicles available today.

The MINI Superleggera Vision Concept is a stunning beauty, embodying everything MINI was, is and can be. But it’s not just the essence of MINI that is captured here, it’s the heart and soul of British motoring, as it was and how it should be. The Superleggera Vision styling evokes lust, and I want one, just as I wanted the vaunted D-Type in my bucket of cars as a kid. But this one wouldn’t be thrown in a bucket. It’d be more prized than my beloved Hot Wheels. MINI claims they are still doing studies to determine when or if this car will come to market. I really hope they build it. And if there aren’t enough to go around, just as when I was child, I’m prepared to fight even my cousins for one. 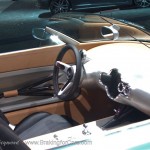 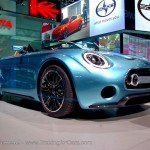 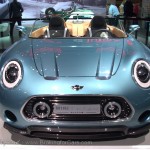 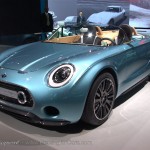 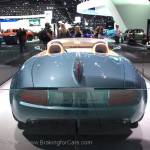 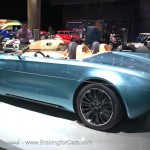 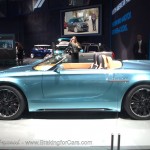